Many TGCT patients that are on medications for their disease have side effects. While these medications help the progression and symptoms associated with TGCT, patients commonly have edema, facial swelling, rash, nausea, constipation, tiredness, and in some cases, change in skin and hair pigment. In order to cope with some of those side effects, doctors may prescribe or recommend other drugs to be given in combination with your treatment. 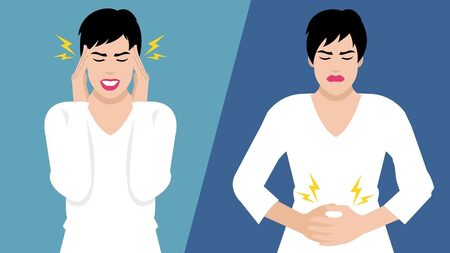 Antiemetic is a drug class for medications that prevent vomiting and nausea. These drugs treat motion sickness, drug side effects, post-operative nausea, and in some cases, nausea associated with pregnancy. Often times these drugs can be taken through a dissolvable tablet, a capsule, or a skin patch. The two most commonly prescribed antiemetic are ondansetron (Zofran) and promethazine (Phenergan). There are two ways these drugs work, 1) ondansetron works by blocking serotonin signaling in your brain. This disrupts the signal between your brain to your gut. 2) phenergan works by blocking histamine signaling in your brain. This allows your brain to signal to your gut to relax. Other anti-histamines, such as Benadryl, can block histamine signaling and lead to decreased nausea.

There are two main classes of medications used to treat constipation. These drugs can be taken orally or through suppositories. They can be broken down into Laxatives and Surfactants:
​

Edema is caused by excessive fluid trapped in your bodies tissue. Commonly, Edema presents either in the limbs or face and can be a side effect of these CSF1 inhibitors. It is important to drink more water than usual. Often times when you're dehydrated, your body holds onto water. Therefore it's important you consume around 3.7 liters (men) and 2.7 liters (women) (5). However, if significant swelling has occurred, diuretics can be used. One of the most commonly prescribed diuretic is furosemide (Lasix). Your bodies water is commonly regulated by systemic sodium concentrations. Most of these drugs help rid your body of water through releasing more sodium into your urine. While the sodium leaves your body, it brings water from the blood along with it. This can also reduce blood pressure. ​

TGCT SUPPORT IS A PROGRAM OF THE LIFE RAFT GROUP